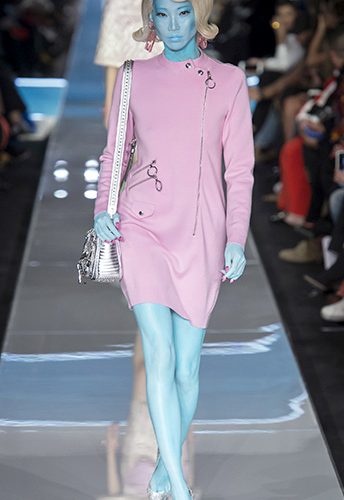 Jeremy Scott is a conspiracy theorist – for the season, at least. His Moschino AW starting point was a JFK conspiracy, the one conjecturing that President Kennedy told Marilyn Monroe aliens were real, that she was going to go to the press with the story, and that she was offed because of it – as was he just over a year later.

The tale’s delightful ridiculousness (a Scott speciality) inspired a conspiracy theory of his own: that Jackie Kennedy was an alien herself, and responsible for both of their deaths. If you were wondering why a few of the models were painted extraterrestrial shades of orange, yellow, and aqua, now you know.