Chanel No 5: 100 Years of Iconic Imagery

Coco Chanel revolutionised the fashion and beauty of women everywhere when she launched her iconic No. 5 fragrance on May fifth, 1921. Since its debut, Chanel No. 5 has remained one of the world’s top-selling perfumes.

And it’s not just the fragrance itself, the early advertising campaigns of Chanel No. 5 continue to inspire the beauty world’s most famous campaigns.  Chanel No.5 unprecedentedly combined the most famous faces with visionary photographers, creating the blueprint for the typical beauty campaigns of today.

To celebrate 100 years of Chanel No. 5, here are ten of the perfume’s most iconic advertising campaigns:

The earliest advertising for No. 5 was strictly via word of mouth; Coco would bring ladies who would later be known as ‘tastemakers’ to sophisticated dinner parties, where she would spritz them with this legendary perfume. Sem, a cartoonist, created this now-iconic tribute to Chanel’s No. 5 in 1921, picturing Mademoiselle Coco herself looking rapturously up at the classic bottle, dressed in Chanel’s effortless, figure-flattering style. She is the embodiment of The New Woman, and her signature scent is No. 5.

You can’t talk about Chanel No. 5 without mentioning Marilyn Monroe. In an interview with Life Magazine in April 1952, she famously said, “I only wear Chanel No. 5!” to the “What do you wear to bed?” question. The fragrance was suddenly connected with the world’s most glamorous movie star, and sales soared. The interesting thing is that Marilyn didn’t become an official Chanel ambassador until 2013 with this No. 5 commercial, which means that the most successful celebrity fragrance endorsement of all time didn’t cost the brand a penny at the time.

Many other actresses were eager to be the “face” of the scent after Marilyn, ushering in the era of celebrity advertising. Suzy Parker, an actress and model, was one of the first; in this ad photographed by Richard Avedon, she’s portrayed as the ideal No. 5 lady of the 1950s: vivacious and joyful, clearly upper class, and impeccably dressed. Throughout the 1960s, the phrase “Every woman alive adores Chanel No. 5” would be used.

Because of commercials like the one above, No. 5 was regarded as the fragrance of affluent aunts by the mid-sixties, and not something that the lovely young people desired to wear. Ali McGraw, who fronted the Chanel No. 5 for Bath campaign, altered that. Her It-Girl attractiveness and wide-eyed beauty introduced the scent to the youth and maintained it there.

Together, Catherine Deneuve and Chanel created some of the most famous and memorable pictures in the history of beauty. There are no slogans or words in the ads; all that is shown is her face, the bottle, her name, and the brand. No. 5 has become a symbol of refined French beauty. The reason for this is because of these Avedon-shot photos.

Former Bond girl Carole Bouquet was the brand’s face in the 1980s. Chic, French, and stunning, she was the face of the company in vibrant print advertisements and romantic television commercials (directed by geniuses such as Ridley Scott). The advertising for No. 5 at the time was straightforward, with minimum wording and vivid imagery, and they focused on showing women how this classic scent could fit into their current lives.

Iconic artist Andy Warhol created a series of prints incorporating the iconic No. 5 bottle, and Chanel purchased the rights to use them in their commercial campaigns in the late 1990s. As a result, the legacy perfume received a much-needed dosage of pop art cool in the form of a world-famous, memorable advertising campaign.

Actor Nicole Kidman was named the face of Chanel No. 5, imbuing the fragrance with her elegance and movie star glitz. Moulin Rouge director Baz Luhrmann photographed the print and now-famous TV advertising, turning both into a true spectacle — this campaign was a lavish visual feast that associated the fragrance with beauty, passion, and star power. This ad suggests that if you want to be a celebrity, you should follow this advice. Chanel No. 5 is the one you should be wearing.

With Brad Pitt as the first male to front a Chanel No. 5 campaign, the needle swung back to simple, minimalist advertising. The perfume — and hence the woman who wears it — is positioned as the hero here, with Brad as the attractive accessory, in stark black and white with the bottle in colour. The story of the Chanel No. 5 woman and the romantic, adventurous sensations she evokes in the object of her devotion, rather than Brad Pitt himself, is further emphasised in the oft-joked about television advertisement.

In this simple, now-iconic campaign, supermodel Gisele Bündchen became the face of Chanel No. 5. Gisele is naturally attractive, confident, and glamorous, reclining in a lit-up “5” wearing a modest black dress and a ton of diamonds — the perfect No. 5 woman for the decade. Mademoiselle Chanel would undoubtedly approve.

What’s your favourite Chanel campaign? Stay with The Last Fashion Bible for all the latest fashion news.

Priscilla Presley Breaks Down 15 Looks From 1960 to Now 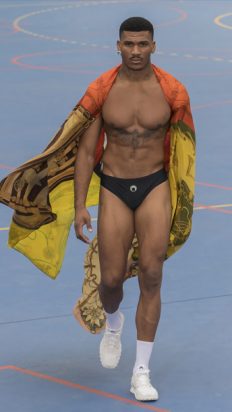