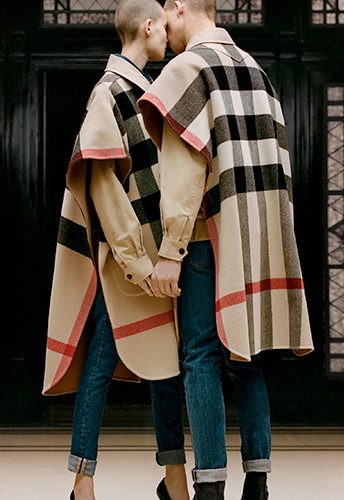 Ricardo Tisci, who was named chief creative officer of Burberry in March, didn’t design these clothes; the in-house team did. Rather, he “curated” the pieces and styled them on the men and women paired off in these eight photos.

So what can the his-and-hers trenches, car coats, Harrington jackets, capes, kilts, and dark-rinse denim tell us about Tisci’s aesthetic vision? While the models are fairly androgynous and the styling emphasizes the gender flexibility of the Burberry codes, it’s somewhat surprising to only see images of apparently straight couples. Tisci is a proud champion of trans models like Lea T., and his predecessor Christopher Bailey’s sign-off show in February was a colourful celebration of LGBTQ+ rights.