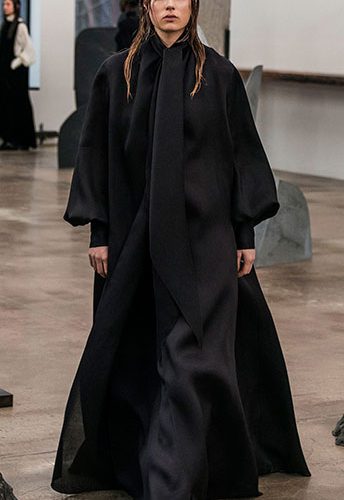 If the mountain won’t come to Muhammad, then Muhammad must go to the mountain. Except, in this case, Muhammad is the artist Isamu Noguchi, and the mountain, the perhaps rather more diminutive (though no less monumental) The Row.

The label’s Mary-Kate and Ashley Olsen filled their downtown studio with pieces from the Noguchi Museum over in Long Island City for their Fall 2018 presentation, including artworks rarely seen before, lending a serene beauty to the proceedings. There had been, for a brief nanosecond, a flirtation with doing the presentation there, instead of Manhattan, and we interrupt our regular reviewing schedule to issue a heartfelt thanks to Mary-Kate and Ashley for sticking with their own space. Of course, with the organic flowing forms, the respect for materials allowed to shine, and the simplicity that in turn reveals many compelling subtexts, we could be talking about The Row here as much as Noguchi himself.

This was one of those achingly chic dream-wardrobe collections from the Olsens. The starting point, they explained afterward, was the idea of uniforms and what you can do with them. That meant the likes of trenches, roll-neck sweaters, wide pants, and bathrobe coats cut with a controlled yet generous hand and artfully constructed to drape and fall around the body. In other words, that increasingly rarely seen phenomenon known as “day clothes,” which have, this New York season at least, been in very short supply.

Given the impending Phoebe-free era we’re about to enter, it’s surprising that more aren’t prioritizing them to the same degree as Ms. Philo has in the past or, indeed, as the Olsens continue to do. The silhouette counterpoints to this came with the accessories: the small and neat sectional shoulder bags clasped close to the body, and mid-height pointed-toe stiletto boots whose narrow angularity was in sharp, cool contrast to the ease of the clothes.

For evening, they kept it simple yet so not: The brilliant combo of a high-neck sweater pulled taut over the body with a skirt whose volume tapered as it reached the floor, or an ivory bell-sleeved gazar blouse with a black velvet skirt whose silken surface had been slashed hundreds of time over. That fabric treatment, like a pleated dress that had taken hours of work on the dummy form, underscores (no pun intended) the kind of ambitious craftsmanship this duo are capable of. But it’s more than that; it’s the idea that things of lasting value don’t happen in the blink of an eye.

With their commitment to creating a label that is diametrically opposed to the idea of disposability and the eddying turnaround of trends, it’s a quietly political and personal statement about fashion. The best of New York has, in the last few days, sprung from a sense of commitment to a better vision of the world, and in their own way, the Olsens are absolutely no different.

This article first appeared on Vogue.com.